I belong to a traditional fishing people from the Senegal River valley. My people have always chased crocodiles and hippos from the river using mystical formulas. Today, with the changes affecting the river, the crocodiles have disappeared; mine are only fishermen and there are not many fish left. On the ruins of these mystical beliefs and the warlike exploits of our ancestors, still carried by the song of the Pékaan, the lives of the inhabitants of my neighborhood are mired in poverty. A hope remains carried by the epic gesture of the women who could reseed the river.

In 2009, she joined the Master of Creative Documentary Directing at Gaston Berger University in Saint Louis (UGB). The school film that she directed in 2009, Face à face, won Ebène for Best Documentary at the Neighborhood Film Festival. In 2011, she produced Une jour avec Ngoné as part of a series in collaboration with Arte. Mame Woury Thioubou, who attended Africadoc in Fundamentals of Production in 2016, joined the Impluvium Productions structure. The same year, she directed her first medium-length film Agora Braille which deals with the education of blind children in Senegal through the struggle of an emblematic woman, Aïssata Pouye. In 2018, she completed the making of her first feature film, Fifiré en Pays Cuballo in the Senegal River Valley. 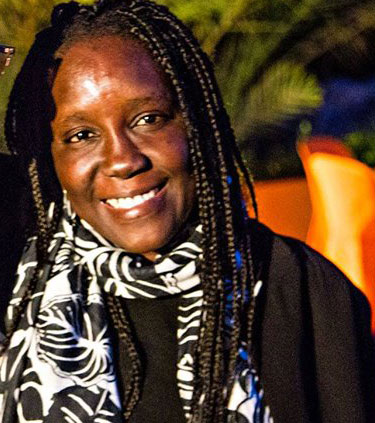 The films of the caravan